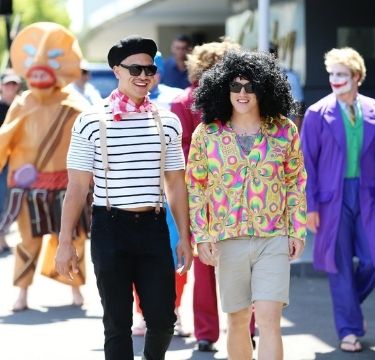 70s, 80s, 90s Party Themes: – There is nothing better then turning back the clock few years dressing up as your favourite rockstars like Kiss or John Travolta out of Greece. You and your footy team will be the centre of attention everywhere you on go on your footy trip turning heads for photos.

Fireman Party Theme: – You can’t go wrong with a mens fireman costume for your next Footy Trip! Turn heads with funny, bizarre, female and male fire fighter costumes with accessories available as well. Bust open the fireman shirt, with some fake grease on your face and don your fire hose for a big night out!

Superhero’s Party Theme: – Why not spend the weekend pretending you have super powers beyond those of normal people! Spend your celebration as a Superhero and your team can make help the world become a better place by protecting the public and fighting crime! Well… you don’t actually have to but you can create some great games to ensure the piss is taken of every person for the day!

Simpsons Party Theme: –  Who hasn’t enjoyed a Simpson’s Themed party before? If you haven’t tried this before you definitely need this one at the top of the list. You will have people in stitches and you will have a crowd of paparazzi following you everywhere. Being bright yellow Simpsons Characters such as: Homer, Marge, Bart, Lisa, Krusty The Clown or Itchy and Scratchy to name a few. The friendly team are professional event planners who leave no stone unturned when planning your footy trip, afl trip, soccer trip, netball trip, basketball trip, cricket trip and more… we might even throw in some free costumes for your team! With our exclusive End Of Season Costume suppliers we are able to provide your team with awesome costumes. Whether you want funny costumes, specific theme costumes, easy costumes or ridiculous/embarrassing costumes we have you sorted.

The End of Season costume tradition is the ultimate day to dress up and let the boys celebrate the team performances throughout the year and hard work committed to training weekly. Rewarding your sports team increases team morale and creates strong bonds between team mates. Next time you are looking for a costumes think about our Team Trip Costumes available for sports teams.

Get in touch with us at Team Trips when reserving your end of season celebration to organise your costumes. Save overall on costs by getting bulk costumes to fit-out the whole team with perfect kit. You won’t have to worry about losing someone with some head turning costumes like what we have in store. Basically anything you can think of we have it when it comes to costume themes.

History Of The Monday After Grand Final Tradition

After a gruelling season it’s finally time to let off some steam with your team mates. A weekend of celebrations usually ensue involving drinking, challenges, games, and who could forget…the crazy costumes!

The day of course falls on a Monday as the celebrations continue after a dusty weekend (but you celebrate it on any day). The Monday after the grand final has been a long running tradition with sports teams as a way to celebrate new members first year as well as any other “firsts” for team mates. This can apply for ‘first goals’, ‘first injury’ and any outside game “firsts” that the team decides on.

It’s an interesting day of bonding, looking after mates that peak too early, and getting to hang with the older players. Although the tradition has come under fire due to some people taking it too far. But what really makes it, is the crazy costumes and outfits. You can still be responsible (some-what) and wear a kick-ass costume!

Head out on the Monday after Winning Grandfinal as a shark, an avenger, a big baby…you name it we can find it for you! They’ll be plenty of laughs and photo opportunities with these team costumes. We reckon it doesn’t need to be Halloween to break out some creative style. And there’s no better way of kickstarting your Monday weekend than a striking outfit!

So what exactly is the Grand Final tradition? An end of season celebration full of drinking, challenges and looking pretty fly in some crazy costumes and outfits. Our tip? NEVER skimp on the costume. Poor effort in the wardrobe department will cost you! Challenge yourself to find the most outrageous style, wear it with confidence, and you’re a walking conversation starter. Or, get your team to rock a theme as a group, and live it up like the legends that you are!

Here at Team Trips we’ve made the option of organising your end of season monday costumes and merchandise a stress free easy option. No need to search multiple sites when we can instead do it for you! Whether you’re after something hilarious to get the group laughing or maybe something more on theme to your team colours we can find it for you. Turn your event into one to remember with a great costume and a great trip away with your teammates. You can’t lose with an option like that!

What is the Footy Costume Tradition ?

The Monday after a sporting grandfinal namely footy is an Australian term used to refer to the traditional end-of-season footy celebrations for professional sports players. It is a way to celebrate new team members first year and all the achievements the team has made throughout the year. It is a day of bonding and letting your hair down with some drinks and fancy costumes.

Who participates in the Monday after Grand Final Tradition?

Typically professional football and AFL players celebrate, but teams from other sports are beginning to join in the tradition as well. Teams generally find out results of if they have been eliminated from the season or will continue playing on a Sunday night, determining if they will party on the Monday, often with heavy drinking.

Who started the Grand Final Tradition?

End of Season Monday Drinks has been a tradition in AFL since Dustin Fletcher made his debut for Essendon in 1957. However, it is only in recent years that the Monday events have grown in popularity and celebrated by many teams.

One of the biggest aspects of  Grand Final Monday is the costumes and themes. You can go dressed up in whatever takes your fancy, but make sure it is extravagant. You’ve got to go big or go home!

This year Team Trips helped us celebrate an epic end of season footy trip to the Gold coast. I can’t rate them highly enough and their support throughout the year was incredible. We can’t wait for our 2019 end of season trip with Team Trips!! Thank you again Kylie and Team Trips for all your hard work! 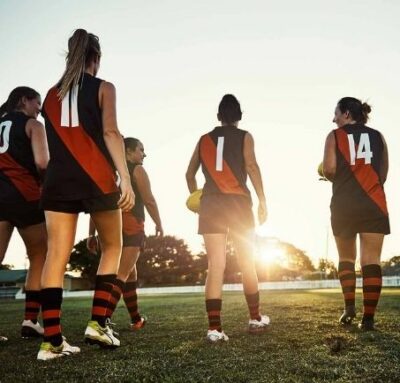